The fitness industry is bombarded with fads and quick fixes that almost never work but make large promises. "Drink this tea", "Avoid carbs after dark", "Don’t use weights because they will make you bulky". Such misinformation often leads to misconceptions that could be detrimental to your fitness journey.

How many times have we heard the saying “I want to be toned”?. Many people enter the gym wanting to look “toned”, but have no idea how to get there. With misinformation all over the internet, women do hours of cardio or follow Instagram workouts from their favourite influencers expecting to be toned but are never able to achieve it. Other dangerous behaviours include eating little to nothing to potentially achieve their desired look.

The outcome is a lighter and smaller frame on the scales for sure. But this doesn’t guarantee a loss in body fat as no muscle tissue is stimulated so they don’t achieve that ideal look that they were after in the first place.

People may also end up hitting a roadblock or plateauing after an initial success, resulting in even more confusion on what to do next. Eat even less food or train even more?

So how exactly do we achieve this muscle “tone” and not get "bulky"?

"Tone" is muscle. We need muscle to achieve tone, And that is done by lifting weights and doing resistance training. Lifting weights does not make you "bulky" like a bodybuilder with massive muscles. For an average gym-goer who works out a few times a week, it is unrealistically difficult.

Moreover, there are plenty of reasons why women won't get bulky through resistance training.

1. Women don't have as much testosterone as men

We’ve all heard of testosterone with regards to the male body but what exactly is its role?

Testosterone is important for the desired adaptations to resistance training; in fact, it is considered the major promoter of muscle growth.

Although females do still produce a level of testosterone, it’s nowhere near what men produce.  From male puberty onwards, differences in athletic performance emerge (virtually all elite sports are segregated into male and female competitions, as women have disadvantages against men) as their circulating testosterone concentrations rise.

In short, less testosterone in women means women are less likely to get too bulky.

2. You won’t get bulky if you’re eating in a calorie deficit

For those chasing “tone”, this does not mean you cannot achieve this in a calorie deficit. You can undergo a body recomposition process that focuses on changing your ratio of fat mass to lean mass - that is, losing body fat and gaining muscle mass.

In order to achieve this, a small to moderate calorie deficit is ideal (a huge calorie deficit won't work in this situation). This, combined with resistance training and consuming a sufficient protein intake (1.6g to 2.2g per KG of body weight) can help with body recomposition.

Body recomposition is the most efficiently done in

For those who have done resistance training before, In this situation don’t be turned off if the scale is not moving too much. It doesn’t mean you’re not progressing. Muscle is denser than fat and takes up less space gram for gram. That’s why using other tools other than the weighing scale matters, like taking your measurements and pictures as you may be losing inches while keeping your weight the same.

Overall, eating too much of anything be it, vegan, paleo, organic, grass-fed, fairy-raised, and/ or superfoods could make you "bulky".

3. Building muscle is a long, slow process that requires years of consistency, dedication and effort

Most people don't put in enough time or effort to create the kinds of physiques they're scared of. It takes several years to put on the kind of mass that bodybuilders have, and there's a reason professional bodybuilders are an elite few: They put in work that most people won't. That’s why training age (how long you’ve been training for) is important.

There are several benefits of resistance training which include improved muscle definition, strength, body composition, metabolic efficiency, and bone density. Not to forget the confidence that comes with weight training, that feeling of being strong! There’s more to training than chasing the number on the scale.

So ladies, if you’re looking to change your body composition don’t be afraid of lifting a dumbbell, or hopping on the machines at the gym, you actually will find yourself looking in the best shape of your life.

Resistance training is a great way for both men AND women to build muscle mass. While women fret about becoming ‘bulky,’ it’s worth noting that body fat is what makes one appear bulky, not muscle. Muscle makes a woman look toned because it also proportionately decreases body fat!

Looking to lose fat, build muscle and get into better shape? Contact Azeemeh to schedule a PT trial and consultation to get started on your fitness journey! 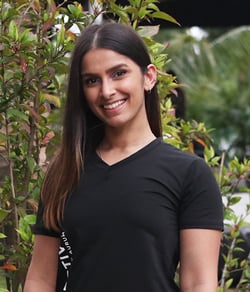 Azeemeh Taqi is a certified Personal Trainer and also a certified Strength and Conditioning Specialist. She fell in love with resistance training and shifted her focus from chasing the smallest numbers on the scale through endless hours of cardio and minimal food to being empowered by feeling strong and using proper nutrition to fuel her body for optimal performance.

Azeemeh believes that she can use her experiences accumulated over the years to help others in a similar position to her in the past, to overcome obstacles and get to a better place, both physically and mentally.

Azeemeh has worked with clients of all ages and backgrounds, such as those with past and existing injuries, and specialises in fat loss and hypertrophy.

3 Top Exercises to Work Your Butt Off

As a woman with Brazilian and Italian roots, Flavia di Marco and her friends have always been mindful of their butts! Brazilians are very well known for good looking butts but what most people don’t know is how useful our butts can be to our bodies.